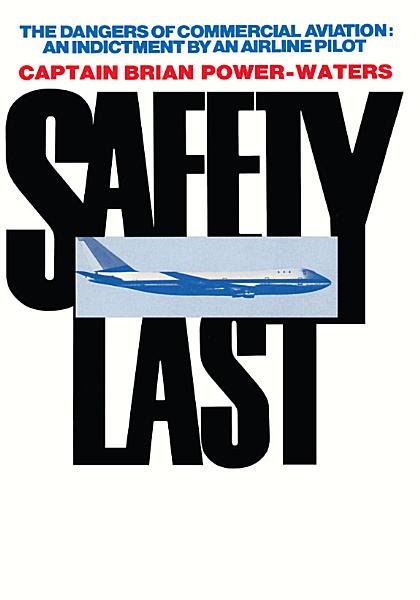 *THIS IS THE REPUBLISHED VERSION. THE ORIGINAL VERSION WAS PUBLISHED IN 1972. THIS VERSION DOES NOT CONTAIN ADDITIONAL OR NEW INFORMATION. The author of this eye-opening expose is a scheduled jet airline captain, as well as a fighter pilot in the Air Force Reserve, with twenty years of professional flying experience. Writing from the standpoint of a view of a pilot, he covers every aspect of commercial aviation and brings the reader to the conclusion that it is a much more perilous means of transportation than generally suspected. You will learn how poorly equipped most of our airports are; how the airlines write their own safety regulations and then succeed in evading even those requirements. You will find out what goes on on the flight deck and the dangers inherent in even the most routine shuttle flights. The author examines crash investigations, he take you on spine-tingling reconstructions of disasters you probably read about, and he reveals the often shocking truth of what really went wrong as opposed to what you may have read in the papers. ********** "Safety Last by Captain Brian Power-Waters courageously describes real life in the airline industry and sounds the alarm for urgently needed reforms. It documents the abysmal performance of the Federal Aviation Administration in enforcing air safety standards and the shocking insensitivity of many airline officials. This book should be read by any airline passenger, executive, regulator or legislator who is concerned about protecting human life and safety in air travel." Reuben Robertson III, Director of the Aviation Consumer Action Project and Aide to Ralph Nader ********** "Captain Power-Waters unloads his list of complaints against commercial aviation without hedging and draws a frightening picture of chaos, carelessness and petty internecine warfare within the industry. The literate air traveler who gets his hands on this book may want to swear off forever. . . . Captain Power-Waters hits with authority." Publishers Weekly ********** "Fortunately, most of the flying public is unaware that many in airline management place a greater emphasis on making profits than on adhering to safety regulations. I compliment you on providing us with a damn fine insight into many of the problems which have been either overlooked or purposely evaded. I strongly concur in your book's closing observation that the real key to airline safety must be through a better utilization of the expertise of the pilot and the controller, who know flying best. These men are indebted to you for your daring to buck the tide, and call it as you see it." From a letter to Captain Power-Waters from John F. Leyden, President, Professional Air Traffic Controllers Organization ********** "Safety Last is a fascinating and sobering journey into the realities of commercial aviation. It vividly describes the hazards of non-professionalism in our industry. The reader will also see the critical importance of professional aircraft maintenance along with the need for a more imaginative and aggressive FAA establishment. . . . Captain Power-Waters has courageously assailed the FAA-approved Minimum Equipment List and exposed it for what it is . . . a killer of airline passengers." James Douglas Sparling, Director, Safety and Standards, Aircraft Mechanics Fraternal Association Safety Last was originally published in 1972, there are no new updates in this version.

Authors: Brian Power-Waters
Categories: Transportation
Type: BOOK - Published: 2001 - Publisher: iUniverse
*THIS IS THE REPUBLISHED VERSION. THE ORIGINAL VERSION WAS PUBLISHED IN 1972. THIS VERSION DOES NOT CONTAIN ADDITIONAL OR NEW INFORMATION. The author of this eye-opening expose is a scheduled jet airline captain, as well as a fighter pilot in the Air Force Reserve, with twenty years of professional flying

Authors: Merrill Schleier
Categories: Social Science
Type: BOOK - Published: 2009 - Publisher: U of Minnesota Press
From the silent era until the advent of the Cinemascope--the skyscraper as movie star. Whether tall office buildings, high-rise apartments, or lofty hotels, skyscrapers have been stars in American cinema since the silent era. Cinema's tall buildings have been variously represented as unbridled aspiration, dens of iniquity and eroticism, beacons

Authors: Patrick Waterson
Categories: Technology & Engineering
Type: BOOK - Published: 2018-10-09 - Publisher: CRC Press
How safe are hospitals? Why do some hospitals have higher rates of accident and errors involving patients? How can we accurately measure and assess staff attitudes towards safety? How can hospitals and other healthcare environments improve their safety culture and minimize harm to patients? These and other questions have been

Authors: Cesarettin Alasalvar, Kazuo Miyashita, Fereidoon Shahidi, Udaya Wanasundara
Categories: Technology & Engineering
Type: BOOK - Published: 2011-06-15 - Publisher: John Wiley & Sons
The global market for seafood products continues to increase year by year. Food safety considerations are as crucial as ever in this sector, and higher standards of quality are demanded even as products are shipped greater distances around the world. The current global focus on the connection between diet and